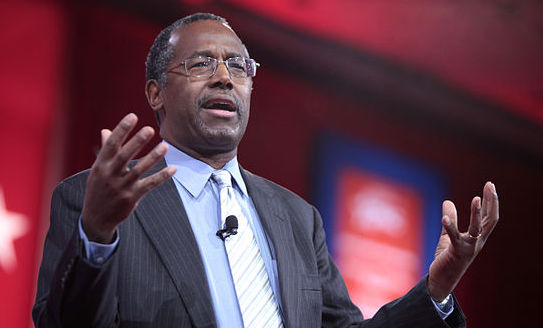 Just about since Ben Carson entered the political spotlight, we’ve known he’s a cock-eyed idiot. Yes, he’s a world-renowned surgeon, but it seems like every single one of the cells in his brain is wired for surgery and none for political acumen or being a person. Now he’s given us another taste of just how much of a semi-conscious buffoon he is. But, what’s more, his behavior is symptomatic of something dangerous in the GOP writ large.

But first, some background.

Carson is Secretary of the Department of Housing and Urban Development, which makes complete sense given Carson’s extensive career in urban revival projects and civil rights. No wait, my apologies; he doesn’t know anything about his job. And he’s a bigot. How do I know these things? Well, for one, under Carson’s rule, HUD has turned away trans people from federally-funded shelters. That’s not to mention Carson’s own transphobic comments.

Carson, a black man, has also shafted black people. The most notable recent instance of this was a jab he took at Baltimore, saying of its black residents: “When I was in Baltimore a couple of days ago, and just looking at a lot of the squalor there … And I saw so many young men sitting on porches, able-bodied young men … how can we get those young men employed in terms of cleaning up the neighborhoods…?”

Carson saw some black people sitting on their porches and assumed, either given the time of day or because of their appearances, that they must be unemployed — a thought so stupid and racist you’d be forgiven for thinking Trump came up with it. Carson might be black on the outside, but he’s a dim-witted bigot like Trump on the inside, who yes, happens to be a pioneering neurosurgeon.

Fast forward to now. From Politico: “Housing Secretary Ben Carson appeared to stray from prepared remarks as he introduced Donald Trump on Friday, declaring that the president ‘is not a racist.’”

But it gets richer. “‘He’s a man who is deeply driven by a sense of kindness and compassion,’ Carson began, looking down at his notes… ‘When he bought Mar-a-Lago, he was the one who fought for Jews and blacks to be included in the clubs that were trying to exclude them. You know, people say he’s a racist, he is not a racist.’”

A few thoughts: (1) Trump is a galloping racist; (2) Trump famously treats his employees like second-class citizens at best; and (3) If he did “fight” for Jews and blacks to be included in clubs, it was exclusively because he wanted their money. Carson’s comments defending Trump are symptomatic not just of his own stupidity, but something more frightening: the eagerness of Republicans to protect Trump. We saw it in the impeachment “trial,” and of course we saw it plenty before then.

852
SHARES
Facebook ShareTwitter ShareEmail this articlePrint Article
LinkedinGoogleWhatsappPinterestRedditStumbleuponBufferTumblrPocketLine
← Bernie Sanders and his attack dogs are completely out of control, and everyone knows itThe New Hampshire primary takes an even stranger turn →
Leave a Comment