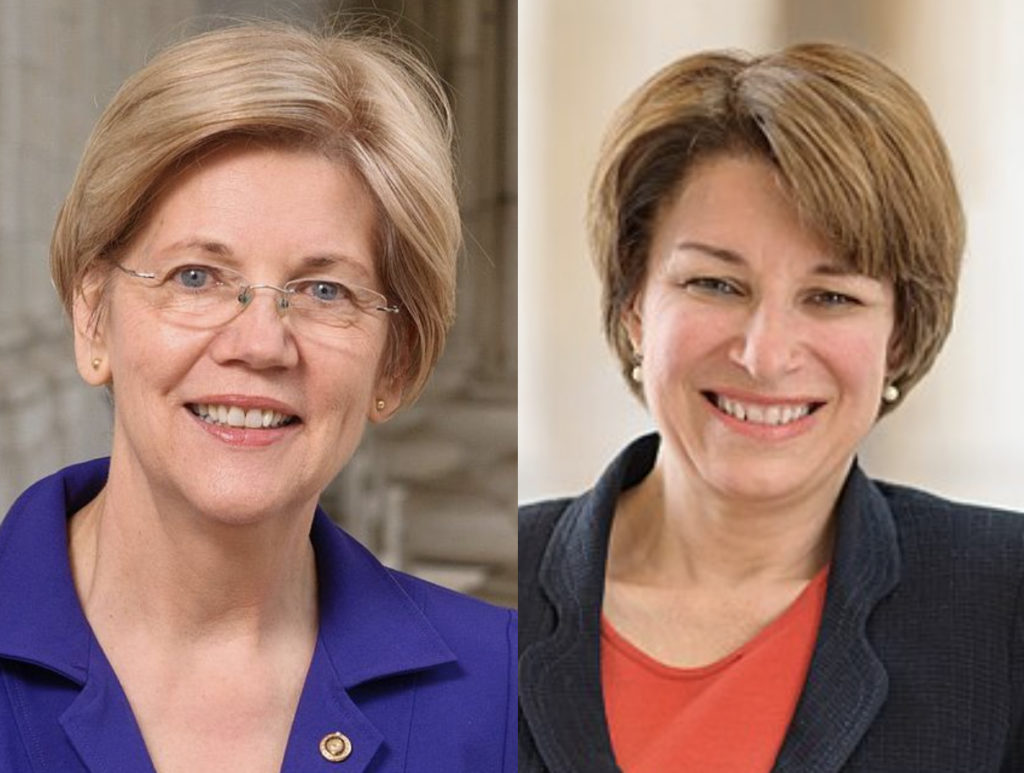 So! How about those three old white guys pushing 80, huh? We have two models 1942 and one model 1941! Say what you will about it, at least they keep most (but not all) of the “she’s too old” comments away from Elizabeth Warren, age 70. Yes, we’d be hearing that and almost nothing but that about Ms. Warren were it not for the late septuagenarian set of Biden, Bloomberg and Sanders, despite the fact that women have a funny habit of outliving men both mentally and physically by quite a few years. Don’t believe me? Just ask John McCain’s mother, Roberta Wright McCain. That’s right, she’s still alive. She just turned 108 on February 7th. She was born two months before the Titanic sank, before anyone had ever heard of World War II, let alone World War I. Think of that!

But let’s be honest. We’re just not as progressive as we think we are. The attitude of many of us is, “we already tried a woman and it didn’t work,” as if “trying a woman” represented some brag-worthy act of rare courage. Never mind that, apart from Barack Obama, Hillary Clinton won more popular votes than any human in presidential candidacy history. Never mind that Clinton outpolled Donald Trump by nearly three million votes. Never mind that Republicans had to fight the filthiest, cheatingest, lyingest campaign of all time to beat her. We tried it, it didn’t work, so it’s back to the middle-1970s-Charles-Palantine-whitebread-male-standard look-alikes. Only older this time.

I hate to sound like a traitor to my kind (in Harrington-speak that’s irony for, “no I don’t”) but I am heartily fed to the teeth with old white guys. I’m positively sick to death of seeing them on TV dominating everything, mansplaining everything, desperately waiting for the woman in the room to shut up so they can “set the record straight.” I’m tired of watching them (and here I’m going to say a naughty word so parents, ask your children to leave the room) fuck everything up. I’ve really had it with the old, angry white guys. I really have.

I’ve had it with their shameful history of misogyny too. Biden’s grabby hands and despicable mistreatment of Anita Hill, Bloomberg’s years of profane, sexist comments, Bernie’s promotion of the rape-fantasy myth. And while I know that of the three of them Bernie is the least of the offenders, I blame him doubly anyway because without him we’d be talking about our Madame President, and not the (parents, out with the kids again) misbegotten asshole we wound up with.

So here comes the disclaimer: I would crawl over broken glass to vote for any one of them if any one of them becomes the Democratic candidate. That doesn’t necessarily mean I like them or endorse them. That means that anyone, including a ham and cheese sandwich, is better than Donald Trump.

But, as some people keep so patronizingly pointing out to me, this is the primary season and not the election, so this is when we endorse. And I endorse Elizabeth Warren first and Amy Klobuchar second.

Why? Because they’re tough, brilliant winners, that’s why. Because neither have ever lost an election. Because they can think on their feet. (Warren’s “I already have a dog” retort to the man who asked her who her “Mike Pence” will be was one of the classic comebacks of all time.) Because they will survive two terms with their faculties intact. Because they will lead America in new ways and steer her out of this sink of corruption she has sunk into. Because they are, both of them, presidential, and we need that just now to reclaim the global reputation that has been so thoroughly squandered by Donald Trump. And because they’re women, and as women they will mobilize that 51% majority of the population like no one else can, and they will defeat Donald Trump.

As a people we demonstrated in 2008 that we are smart enough to see past the irrelevance of skin pigmentation. Are we smart enough to understand that two X chromosomes are every bit as capable as one X and one Y? I think so. I hope so.

In case you’re wondering where I get all this optimism about the power of women from, let me bring a couple of facts of recent history to your attention. Remember the “Blue Wave” of 2018 that restored the House of Representatives to the people? Where would that have wound up without women? Nowhere, that’s where. Remember AOC, and how everyone was saying that she couldn’t win? She did. Recall when not so long ago many of you, who are now singing the eternal praises of Nancy Pelosi, were condemning her for not immediately impeaching Donald Trump? Do you at last understand how, every step of the way, she’s managed to outsmart everyone, as easily and skillfully as she snatched the focus of the State of the Union address away from Donald Trump? That’s why.

Because there is no inherent weakness in women. The incidental biological fact of their possession of slightly inferior upper body strength may have had evolutionary relevance when Neanderthals were competing with Homo sapiens for species dominance, but it is completely irrelevant today. The best of what we have to offer right now in order to defeat Donald Trump are Elizabeth Warren and Amy Klobuchar. But whoever we ultimately choose, we simply must defeat Trump. We must.