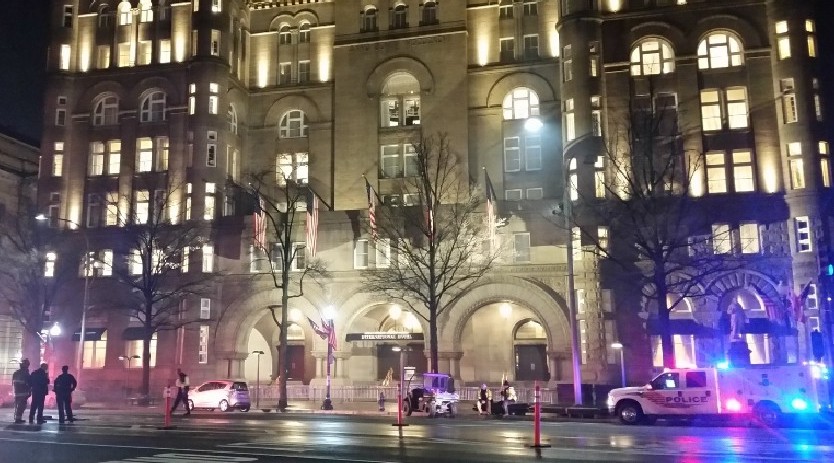 The United States Court of Appeals for the District of Columbia Circuit dismissed a lawsuit filed by a DC wine bar claiming that it was losing business to Trump’s DC hotel because some customers instead sought to curry favor with Trump himself. Before you feel defeated by this, let me say that (1) this suit never stood a chance, and (2) the door hasn’t closed just because this suit got thrown out.

From Politico: “The suit, brought by the Cork Wine Bar, paralleled several other cases accusing Trump of violating the Constitution’s emoluments clauses by hanging on to his hotels and other businesses while serving as president. But the D.C. bar’s suit claimed a different legal violation involving more mundane business-law principles. … [The bar’s] lawyers argued that a provision in the lease for the Trump hotel, which sits on federal property, prohibits Trump or other federal officials from profiting from the arrangement. However, the appeals court said that didn’t support the suit’s theory of unfair competition under local law.”

One of the presiding judges was Judge Merrick Garland. If that name doesn’t sound familiar, it should — he’s President Obama’s nomination to the Supreme Court to replace Justice Antonin Scalia, and whom Senate Majority leader Mitch McConnell entirely refused to consider. Justice Neil Gorsuch took Judge Garland’s place. My point in bringing this up is to show that this case wasn’t decided by Trump-appointed judges — none here were appointed by Trump. The case was, in my estimation, dead on arrival to the district court. Essentially, the bar didn’t provide evidence of unfair competition.

But this doesn’t mean Trump’s DC hotel is immune from lawsuits or investigation. The House typically does not have any law-enforcement abilities, so it cannot issue a subpoena for the hotel manager, for instance, without some purpose backed by legislative intent. The House could have done this during its impeachment inquiry, but chose not to. So how could the House get around this now and go after Trump’s corruption?

Like I said in an article a couple weeks ago, members of the House of Representatives acting in their capacity as Representatives could file a complaint against Trump concerning his violations of the Emoluments Clause. Alternatively, they could introduce legislation concerning emoluments and then leverage their power to investigate and inform regarding legislation against Trump. Here’s what this boils down to: the House needs to barrage Trump with everything they have. It’ll overwhelm him and his attorneys, and it’ll undoubtedly uncover dirt. Trump might have won the impeachment battle, but he doesn’t have to win every court battle.