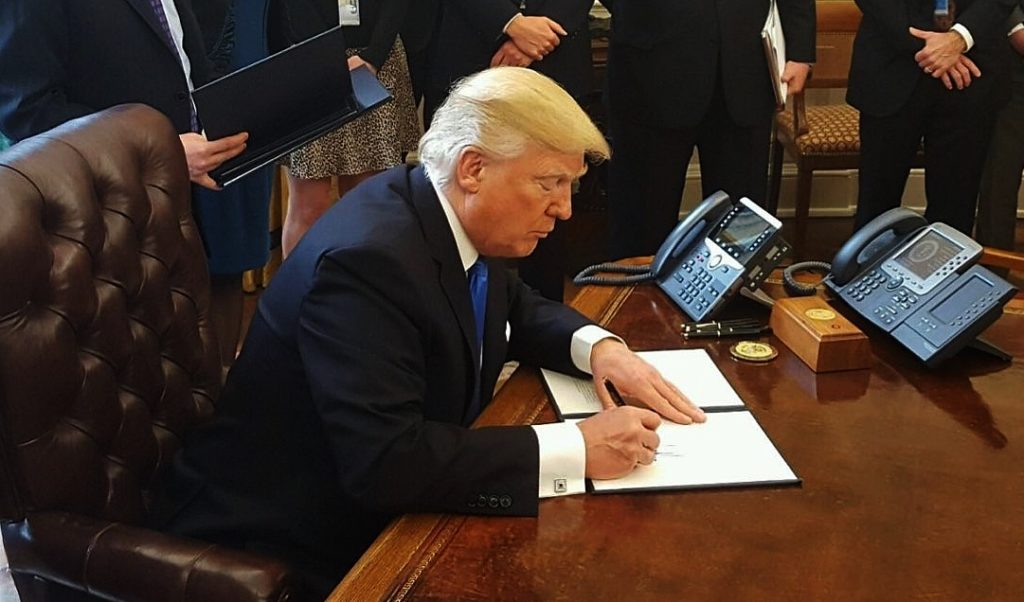 One defining feature of Donald Trump’s presidency has been the constant stream of executive orders, which he began signing on the day he was sworn into office. He’s proudly posed with them on his desk in the Oval Office, even if their implications are extremely dangerous – such as the one reversing President Obama’s executive order that prevented people with mental illness from buying firearms – or laughably unconstitutional (such as the Muslim ban or removing birthright citizenship.) Trumpers who saw Obama’s executive orders as unmistakable proof that the former president aspired to be a dictator ruling by decree don’t have much to say about the 101 executive orders signed by their guy.

Perhaps that’s just as well, because a new policy analysis by the Los Angeles Times indicates that the majority of these orders don’t do much in the way of policy. While the racist Muslim ban was initially carried out as an executive order, that was struck down twice, and the current, revised version was actually issued as a proclamation. The majority have involved putting together task forces which have already disbanded, mainly to appeal to Trump’s evangelical base.

Bills like Trump’s upcoming “free speech” executive order for college campuses largely call for observing laws that are already on the books – even if this one in particular is meant to be a wedge for white supremacy groups to recruit on campuses and spread their bigotry. The trouble with this executive order, #100 to be autographed by Donald Trump, is that even his supporters aren’t really confident in how effectively it will be carried out; his own staff struggled with basic questions during the ceremony.

So why bother? Donald Trump does it because he craves the attention and the spectacle – how he can surround himself with his adoring base, and convince himself that his presidency means something – instill in them the illusion that he cares about them and that he gets things done .This is one more instance of hypocrisy from his celebrity tweeting days that has become a staple of his presidency, the same way he accused Obama of playing too much golf. It’s also setting the stage for how he can lose in 2020, because it’s clear that the very stable genius has no new ideas and can’t be bothered to come up with them. Democrats do have new ideas, however, and we need to make it clear that Donald keeps coming up empty.