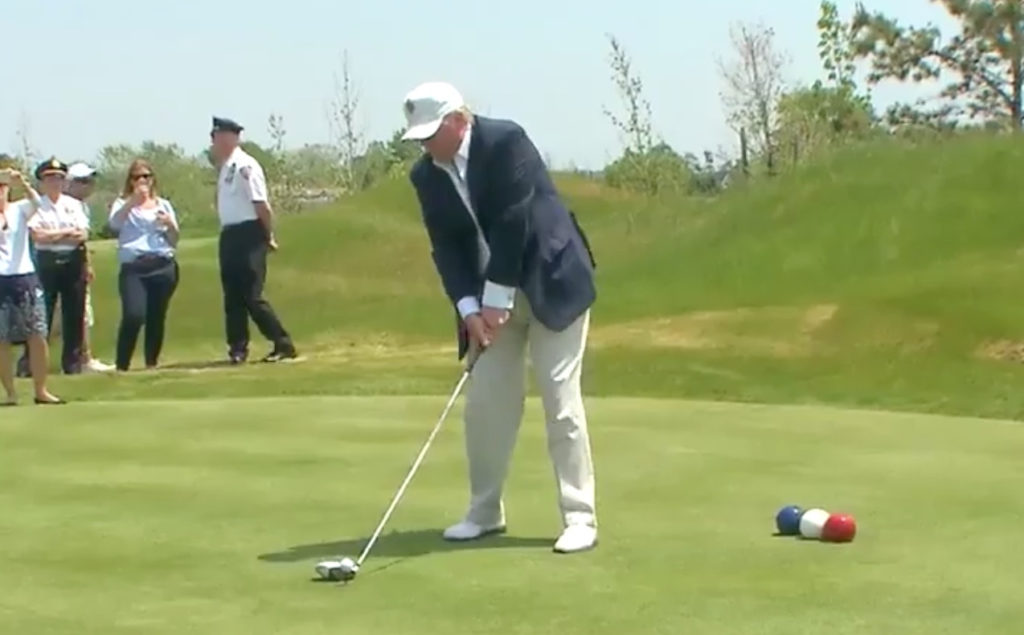 Remember when Donald Trump said that President Obama played golf more than he ran the country? Do you further remember when Trump said he would be “too busy” working for us to have any time to play golf? Yeah, me too. Just another in a long list of lies from the Liar In Chief.

The Huffington Post shares that “President” Trump has spent more than $102 million playing golf, three times what President Barack Obama spent at this same point in his term – but in Trump’s view, President Obama “played too much golf.” The Post then shares some other interesting facts, including that in 853 days in office, President Obama spent 70 days playing golf, 48 of which were on military bases. For one who complains so much about how others spend tax dollars, let’s take a closer look at what Trump has spent, even as he complains.

Trump has spent more than three times the cost of the Mueller investigation on his golf outings. This figure is also 255 more than the presidential salary Trump said he wouldn’t take. The cost of Trump’s golf outings would fund the Special Olympics – which Trump wanted to cut – for six years. Not only are we funding these trips for Trump, he pockets plenty, as he plays and stays at his own resorts and charges the Secret Service room and board. We also now know why Trump wants to stay at his facility in Ireland, which will cost U.S. taxpayers another seven figures. Yet, the same Republicans who complained about President Obama’s golfing say this amount is “insignificant” and his nutty supporters say Trump is “the best president we’ve ever had.” What planet are they living on?

In addition to the golf trips, Trump frequently travels to Mar-a-Lago at $3.4 million per trip. He has spent 61 days at his resort in Palm Beach and 52 days at his resort across the Potomac River in Northern Virginia. According to The Scotsman, the U.S. State Department paid £1.2 million last year for vehicles to shuttle staff from London to Scotland for the sole purpose of watching Trump play at his Turnberry resort. Let that sink in for a minute: we paid £1.2 million so that Trump’s entourage could watch him play golf. “Best president ever?” Whatever these people are drinking or smoking, I wish they would share.

“President” Donald Trump is the worst president ever. Not only has he done nothing – other than giving rich people and corporations tax breaks they don’t need or deserve – he is costing us incredible amounts of money, exploding the national debt, and he’s lining his own pockets while picking ours. The man is despicable for so many reasons, but robbing the public till while advocating cuts to programs is beyond comprehension. We cannot get rid of him soon enough. He will continue to gouge us to the end. Yet another reason that the Resistance needs to stick together to ensure that he is ousted in 2020 – if it doesn’t happen sooner. Personally, I’m keeping hope alive.

1472
SHARES
Facebook ShareTwitter ShareEmail this articlePrint Article
LinkedinGoogleWhatsappPinterestRedditStumbleuponBufferTumblrPocketLine
← Just how ugly is this going to get?You wanted Nancy Pelosi to goad Donald Trump into destroying himself. This is what it’s going to look like. →
Leave a Comment