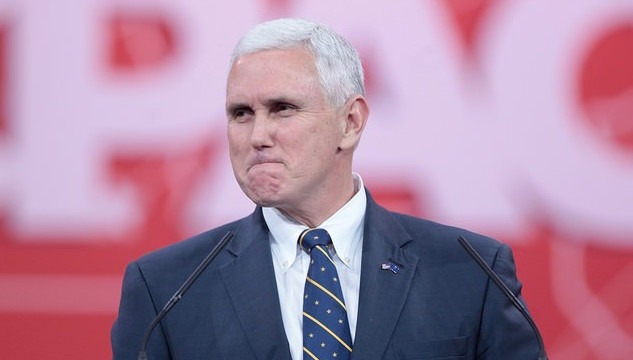 Mike Pence has done so many horrible things and put so many lives in jeopardy during his corrupt political career, his refusal to wear a mask at the Mayo Clinic this week may not be his biggest scandal. But because it’s so perfectly on the nose for this arrogant sociopathic dunce, “mask-gate” is in danger of becoming the first thing people think of when they hear Pence’s name.

Pence seems to know he’s in danger of being tagged with this one forever. In a last ditch effort at making the mask scandal go away, Karen Pence appeared on Fox News today and claimed that the Mayo Clinic never told Pence he should wear a mask. This has the dual distinction of being a lie, and being something that wouldn’t help Mike Pence’s case even if it were true.

Immediately after Mike Pence was seen refusing to wear a mask, the Mayo Clinic posted a tweet making clear that it had warned Pence in advance. That tweet was later deleted for unknown reasons. But the Mayo Clinic also issued a statement to the media confirming the same. It took Team Pence forty-eight hours to dispute this statement. If it were false, Pence would have disputed it immediately.

Even if Mike Pence hadn’t been told to wear a mask, it’s disqualifying that he refused to do so. He knowingly put other people’s lives at risk, because even though he’s periodically tested for coronavirus, he knows full well that asymptomatic people can falsely test negative. In addition, Pence is supposed to be a leader, and leaders lead by example. Pence is the opposite of a leader. Now he’s got “Mother” on TV lying on his behalf. Pence is a coward. He should resign.