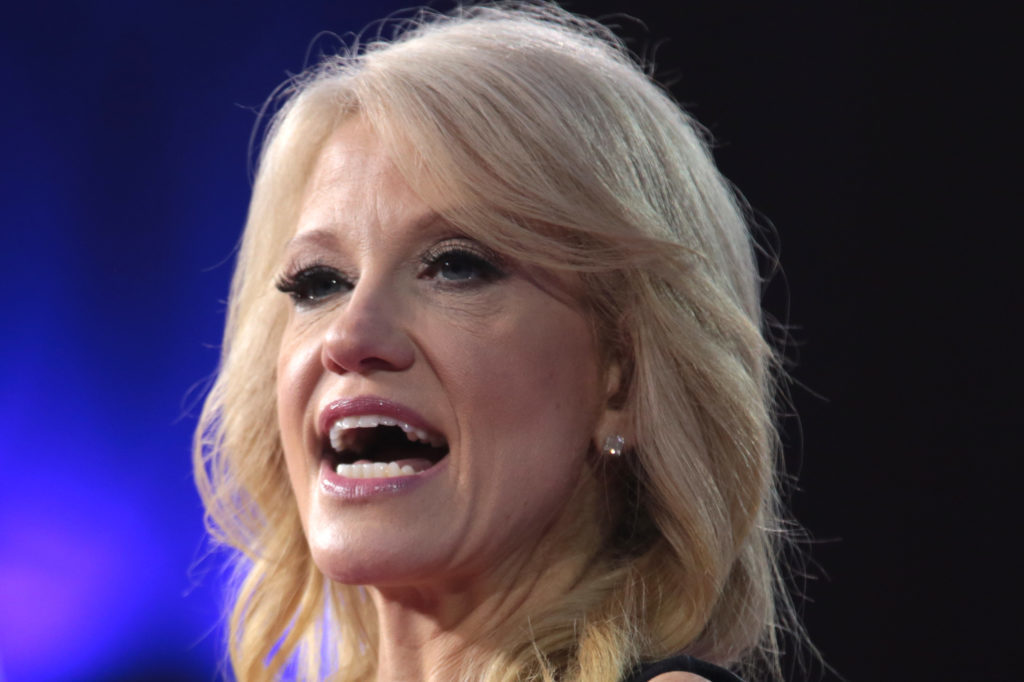 Kellyanne Conway’s principal strategy is the sustained, rehearsed filibuster. She begins by answering a question as quickly and as glibly as she can, frequently including a gaslighting rebuke to the questioner for daring to ask the question in the first place, sometimes by quoting statistics that are typically flawed or even entirely fabricated, other times by answering the question directly with smug, belittling condescension. She then proceeds to indulge herself with a long cadenza of variations on loosely confederated leitmotifs, sometimes wholly unrelated to the original question, whose dual purpose at the end is to bash Obama or Hillary or the Democrats, and finish by extolling with paeans of exaltation for “this president,” Donald Trump.

The pattern is so familiar and so frequently indulged by networks like CNN and Fox News that it has become, in the minds of many, legitimate sophistry. That she does it in order to dazzle, confuse and introduce so many lies and so much propaganda that the interviewer is never able to comment on all of it is obvious. How she gets away with it at all is a shame attributable to the current lamentable state of cable news. It is nineteenth century snake oil sales, rapid fire machine gun staccato rubbish. It happens so fast that the dazzled interviewer is unable to reel it all back in and examine it lie for lie and disingenuous point by disingenuous point. And that is why she does it. Why networks other than Fox News let her get away with it is anyone’s guess. Are outrage and exasperation good for ratings?

They must be. But even Fox News can be indulgent only so far. In a recent interview Fox played a clip for Kellyanne when their own Martha Maccallum asked Trump how he can cut the deficit without cutting entitlements. Trump said, “we’ll be cutting but we’re also going to have growth like we’ve never had before.” Kellyanne came back and gaslighted her questioners by saying, in part, “you’re misquoting him.” Actually, they weren’t misquoting him. They were letting him quote himself.

To be sure, Trump issued a “clarifying tweet” later on that he didn’t mean to suggest that he will cut entitlements. Kellyanne, of course, harped all over that. She then proceeded to crow about how great the economy was, what a horrible deficit Trump was handed by Obama, how Obama “exploded the deficit beyond anything that prior presidents combined had done,” and how, thanks to Trump the deficit is quickly being brought under control and, to paraphrase her remarks with a quote from Orwell, “everybody and everything [is] whizzing rapidly upwards.”

The problem with all that is the annual deficit Obama was handed by George W. Bush was $1.4 trillion. By the end of his second term Obama brought it down to $558 billion. Trump’s deficit is now once again more than a trillion dollars. And yet Kellyanne has the temerity to say the exact opposite, and they let her get away with it. Such is Kellyanne Conway’s world of alternative facts.

As to cutting entitlements, that is already a fait accompli. Not only did Trump say he’s going to cut entitlements, he already has, and it’s in writing — in his latest budget. Trump has cut $920 billion from Medicaid, $756 billion from Medicare, and $75 billion from social security. But the Trump budget isn’t all about cuts, on no. His bloated defense budget, the one that’s already larger than the combined defense budgets of the seven next largest national budgets on earth, has increased to $740.5 billion.

But networks allow Kellyanne Conway to continue to unabashedly lie to the American people. And it works. Most Americans won’t even Google what they’re told. They will simply accept anything they read or hear as truth and parrot it. In fact, it’s rare that anyone Googles anything they are told, as witness the dozen or so “pass it on” bits of “wisdom” that I get in my messenger inbox each week, information that’s only a single google away from easy refutation. Kellyanne knows this and her contempt for our standards of information is evident in her sloppy and shameless and arrogant lies.