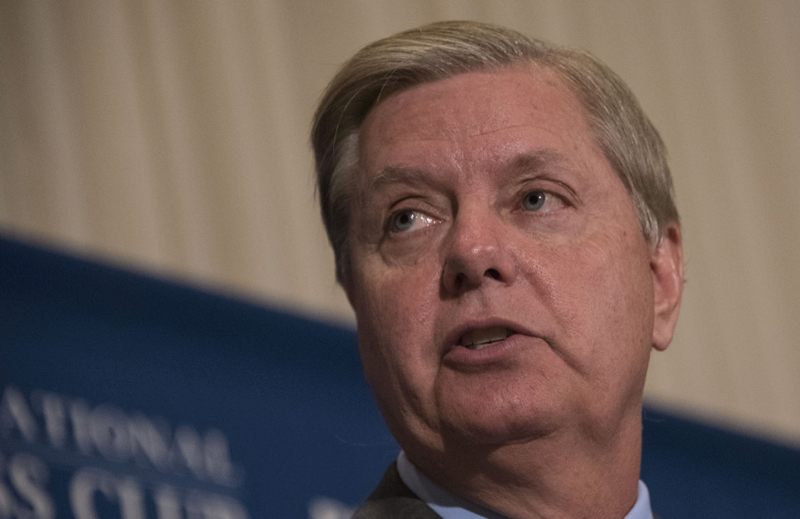 Over the weekend Donald Trump managed to reach a new racist low when he assumed that four nonwhite Democratic Congresswomen were immigrants and told them to “go back” to where they came from. Just about everyone in the real world condemned Trump for his horrid remarks (even Trump’s friend Geraldo Rivera dinged him for it), but not a single Republican in the House or Senate was willing to call Trump out. Instead, GOP Senator Lindsey Graham went on television and tried to defend Trump’s racism. It didn’t go well.

Lindsey Graham appeared on Fox News this morning, and embarrassed himself in a way that we didn’t think was possible – even for him. Graham took aim at Congresswomen Alexandria Ocasio-Cortez, Ayanna Pressley, Ilhan Omar, and Rashida Tlaib, saying this: “We all know that AOC and this crowd are a bunch of Communists, they hate Israel, they hate our own Country … they are Anti-Semitic, they are Anti-America … running on an agenda that is disgusting.”

Donald Trump apparently approved of this asinine meltdown, because he ended up tweeting large chunks of Lindsey Graham’s words, shortly after the deranged debacle aired on Fox News. Of course this entire thing was probably scripted out in advance, considering that Trump and Graham played golf yesterday, and Graham proudly tweeted about it.

Anyone who has been following Donald Trump over the past several decades has long been aware that he’s always been a fraud, a racist, a financial criminal, and a scumbag. What’s jarring here is watching someone like Lindsey Graham, who seemed to be a relatively decent human for the first sixty years of his life, now eagerly turning into a complete monster as Trump cheers him on. It’s as if Graham and others like him simply can’t handle the idea that the world won’t be in the hands of old white men for much longer, and they’re willing to throw their reputations and legacies away in a feeble fight at stopping the inevitable progress.

staging.palmerreport.com
1266
SHARES
Facebook ShareTwitter ShareEmail this articlePrint Article
LinkedinGoogleWhatsappPinterestRedditStumbleuponBufferTumblrPocketLine
← Donald Trump is about to get hit with a one-two punchDonald Trump has bizarre meltdown in front of the television cameras →
Leave a Comment