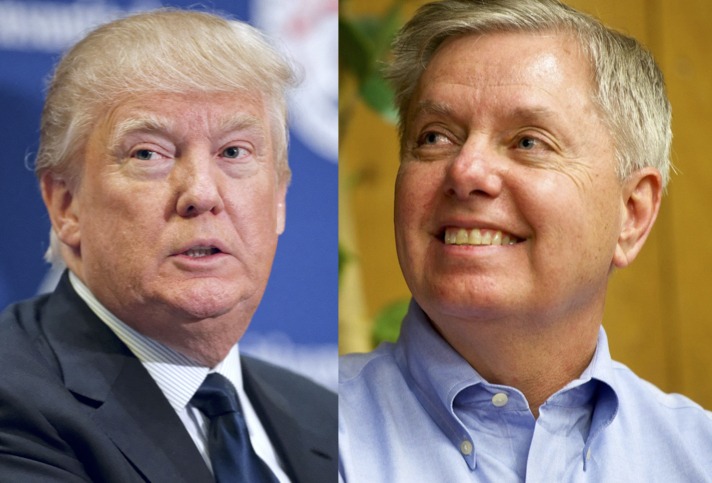 Lindsey Graham is the kind of chaotic wacko whom you shouldn’t trust even when he’s on your side. We learned that the hard way when the passing of John McCain prompted Graham to sell out everything he’d ever stood for and become Donald Trump’s biggest cheerleader. But it appears Trump may now be learning that same lesson the hard way about Graham.

It started over the weekend, when Lindsey Graham helped foil the Trump-Barr takeover of the SDNY. Graham made clear that he would give the Democratic Senators from New York their traditional veto power over any Trump nominee for the SDNY, meaning Trump can’t nominate one of his own lackeys. Now Graham is going against Trump again.

Graham did a CBN interview and specifically pushed back against Donald Trump’s assertion that President Obama committed “treason.” Graham went so far as to say “I don’t know what [Trump is] talking about.” Wait, what? This whole Obama-treason thing is one of Trump’s biggest election talking points.

We can’t trust Lindsey Graham to have suddenly become one of the good guys. But it appears Donald Trump can no longer trust him to be a loyalist. So what’s really going on here? If we’ve seen one consistent pattern from Graham, it’s that he wants to be on the relevant side of things. He sees Trump’s poll numbers collapsing. He knows it’s likely Trump will be gone from politics in a few months, so why try to prop up a sinking ship?

Lindsey Graham also sees his own reelection bid against Democratic candidate Jaime Harrison getting tougher, and perhaps Graham thinks that standing up against Trump might help his own prospects. Of course Graham still has a series of pro-Trump propaganda hearings scheduled in the Senate about the imaginary “Obamagate” scandal, so we’ll see what he does with those. Again, Graham is a chaotic disaster no matter which side he thinks he’s playing for. But he just may be turning into a problem for Trump.

staging.palmerreport.com
874
SHARES
Facebook ShareTwitter ShareEmail this articlePrint Article
LinkedinGoogleWhatsappPinterestRedditStumbleuponBufferTumblrPocketLine
← It’s not over in the Michael Flynn matter, not by a long shotDonald Trump’s Mary Trump problem just got even uglier for him →
Leave a Comment