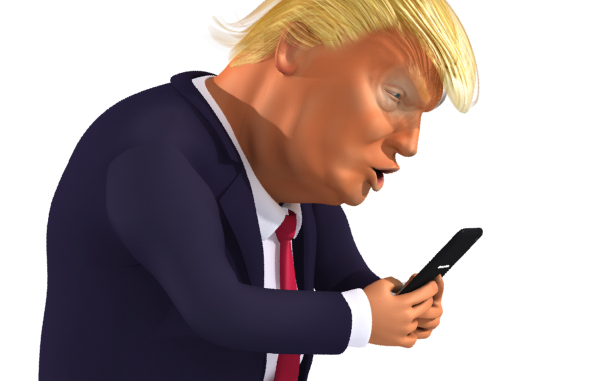 Donald Trump had been rather quiet today, perhaps unsure of what his talking points even are anymore, now that the William Barr-led obstruction strategy has belly flopped into the shallow end of the cesspool. But tonight Trump went on a strange late night bender that was bizarre even for him – and we’re not even sure what to make of it.

Just before midnight, Donald Trump posted a lengthy and strange tweet, which we’ll try to break down into pieces so we can analyze what’s going on here. He started off with “OK, so after two years of hard work and each party trying their best to make the other party look as bad as possible, it’s time to get back to business.” Wait, huh? This doesn’t even sound like him. But then it gets really weird.

Trump’s tweet continued: “The Mueller Report strongly stated that there was No Collusion with Russia (of course).” This is a lie, as Robert Mueller merely stated that he couldn’t establish a criminal conspiracy between the Trump campaign and the Russian government, while spelling out that collusion isn’t even a legal term.

Trump then claimed that Russia was “rebuffed at every turn in attempts to gain access.” This is another bizarre lie, as we know that the likes of Donald Trump Jr, Roger Stone, and several others actively sought out coordination with Russian government intermediaries, with Junior having gone so far as to grant them a meeting at Trump Tower.

Trump then got into the truly laughable part: “But now Republicans and Democrats must come together for the good of the American people. No more costly & time consuming investigations.” This is hilarious, considering that William Barr just finished basically confessing that Trump is pushing him to launch new investigations into his political adversaries.

Finally, Donald Trump reminded us that he still doesn’t know how apostrophes work when he added “Lets do Immigration (Border), Infrastructure, much lower drug prices & much more – and do it now!” This part would be fine and dandy, if Trump meant a word of it. We’re just wondering why he’s posting such a strange message right now that runs so counter to his new strategy of brazenly and openly obstructing justice against House Democrats. No one is buying this crap.