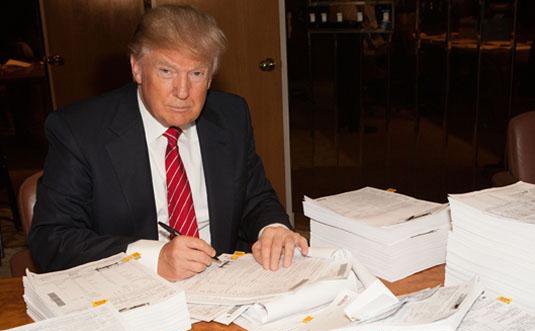 Some of you have just finished reading the headline of this article and you’re already gearing up to post a comment along the lines of “Donald Trump is too [fill in the blank] to ever resign.” Okay, fine. That’s one point of view. But I’m looking at a guy who, each time he’s figured out over the years that he was going to lose, filed bankruptcy so he would walk away in the best losing position possible.

How far gone is Donald Trump? To what extent is the worsening senility and increasingly erratic behavior just an act to appease his braindead base? Your guess is as good as mine. But if he has even a fraction of his marbles left, he surely understands how much trouble he’s now in. His only remaining play is to try to use the courts to block or delay the evidence and testimony that House Democrats are seeking. But the courts are ruling against him, and fast.

If Trump has any cognitive ability remaining, he knows that he’s down to his last strike. The appeals court will swiftly uphold this week’s lower court rulings. That’ll leave Trump’s last stand, when he asks the Supreme Court to jump in and bail him out. He thinks he has Brett Kavanaugh in his pocket, and maybe he does. Maybe Neil Gorsuch too. But John Roberts has always cared more about his own legacy than anything else.

Roberts is unlikely to overturn the settled law that makes clear that Trump can’t use executive privilege to block people like Don McGahn from testifying. Perhaps more importantly, now that an IRS lawyer has crafted a memo affirming its legal obligation to turn over Trump’s tax returns, there’s virtually no chance Roberts sides with Trump on that one. We may be mere weeks from Nancy Pelosi having Trump’s taxes, and that could be enough to finish him in every sense of the word.

House Democrats may not even have to wait that long. We learned yesterday that Wells Fargo and TD Bank have already turned over Donald Trump’s financial records to the House. Deutsche Bank is confirmed to have several years of Trump’s tax returns in its possession, ostensibly from when he applied for loans. If these other two lenders also have Trump’s tax returns, then the Democrats already have them.

So imagine being Donald Trump and realizing that if John Roberts casts the swing vote against you, the House Democrats could soon have your tax returns, financial records, and testimony from key witnesses – and they already have financial records which may incriminate you. At what point do you calculate that you’re not going to win this? At what point does walking away with the best losing deal possible become preferable to what’s on the other side of your tax returns?

If Trump were to cut a resignation plea deal now, he could probably get immunity for him and his family on many – though certainly not all – of the numerous criminal charges that are awaiting him. He could get House Democrats to burn his tax returns instead of exposing them. He could presumably keep at least some of his current properties, even as others are inevitably seized as asset forfeitures. And he could tell his idiot base that he’s walking away because he’s already accomplished more in 2.5 years than any other president accomplished in four or eight years.

If Donald Trump ends up losing his court battles over evidence and testimony as quickly and emphatically as it now appears he’s going to, he’ll be 100% out of viable options. Sure, he can sit in the White House and tweet nonsense while House Democrats destroy him to the point that 2020 will become nothing more than a fantasy for him. Or he can declare bankruptcy on his crime spree and take his chances on New York state criminal charges. That’s up to him. But the way things are now going, he has to be at least kicking the idea around.

staging.palmerreport.com
1963
SHARES
Facebook ShareTwitter ShareEmail this articlePrint Article
LinkedinGoogleWhatsappPinterestRedditStumbleuponBufferTumblrPocketLine
← The floodgates are open and Donald Trump is drowningDonald Trump’s downward spiral has pushed the GOP to its breaking point →
Leave a Comment