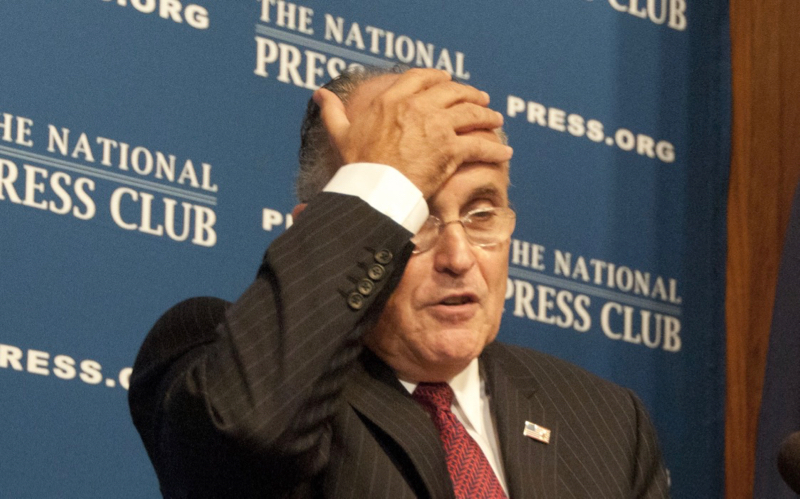 Yesterday, after it became clear to everyone involved that Nancy Pelosi was steamrolling Donald Trump, some of Trump’s fans decided to try to shake up the chessboard by passing a doctored video which falsely depicted Pelosi as slurring words. It’s not clear if Rudy Giuliani knew the video was a fake when he tweeted, but either way, he ended up with egg on his face for promoting yet another phony scandal. Rudy ended up having to delete it – and then the real fireworks began.

After Rudy Giuliani deleted the fake Pelosi video, he posted this completely gibberish tweet: “ivesssapology for a video which is allegedly is a caricature of an otherwise halting speech pattern, she should first stop, and apologize for, saying the President needs an ‘intervention.’ Are”

No really, that was his tweet. At the end of it, as if to try to turn the whole thing into performance art, Rudy attached a random animated GIF of some basketball players. Half an hour later, Rudy tried to clean up his mess by tweeting this instead: “Nancy Pelosi wants an apology for a caricature exaggerating her already halting speech pattern. First she should withdraw her charge which hurts our entire nation when she says the President needs an “intervention. “People who live in a glass house shouldn’t throw stones.”

Okay, fine then. But here’s the thing. Team Trump is trying to make the argument that there’s something wrong with Nancy Pelosi, yet Trump’s lawyer is so far gone, he’s tweeting things where the most coherent word is “ivesssapology.” It’s clear which side is cracking. By the way, Donald Trump also tweeted a less blatant, but still dishonestly edited, video of Pelosi’s speech – which he still hasn’t deleted.