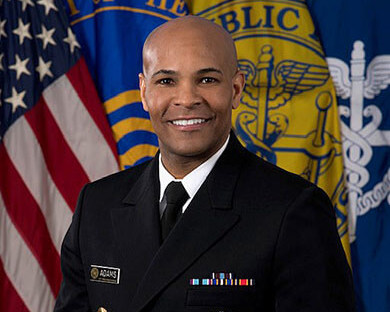 Donald Trump only hires people if they’re corrupt, incompetent, stupid, willing to do his criminal bidding, willing to lie on his behalf, or all of the above. So it was a matter of time before Trump’s Surgeon General Jerome Adams revealed himself to be a bad apple. Sure enough, that happened today in a big way.

The numbers show that the coronavirus is killing nonwhite people at an alarmingly higher rate than it’s killing white people. It’s not yet known if genetics is playing any part in this. But it’s a given that the racial inequity, economic inequity, and medical care inequity in the United States are at least partly responsible for the disparity in coronavirus deaths. Now that the media is focusing on this disparity, Trump felt compelled to address it – by trying to explain it away.

Trump sent Surgeon General Jerome Adams to the podium today to tell people of color to “avoid alcohol, tobacco and drugs.” That’s right, the Trump regime is taking the position that nonwhite people are only dying from the coronavirus because they’re alcoholics and drug addicts to begin with. Then, just to leave no doubt about his racist intent, Adams added this bizarre and offensive advice: “Do it for your abuela, do it for your grandaddy, do it for your Big Mama, do it for your pop pop.”

We knew going into this that Donald Trump would try to blame black people for the fact that they’re dying from coronavirus. We just weren’t expecting him to send his one black guy out there to say it for him. That’s some next level racism right there.

staging.palmerreport.com
1339
SHARES
Facebook ShareTwitter ShareEmail this articlePrint Article
LinkedinGoogleWhatsappPinterestRedditStumbleuponBufferTumblrPocketLine
← Donald Trump has his most berserk press briefing yet, after his own handlers tell him to stop having themThe real story behind Donald Trump’s voter fraud conspiracy theory →
Leave a Comment