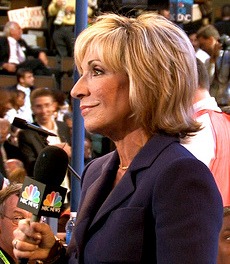 I don’t enjoy being mean. I really don’t. And some cable news pundits are, by definition, better at what they do than others. If I were one myself, I’d be the worst one of all because it’s just not my arena. But everyone on the air, whether they offer anything of value to the news reporting process or not, seems to have a reason for being there. Some offer unique information. Some are charismatic. Some are just plain smart. Some aren’t great at their jobs but they have such great inside sources that it’s almost excusable. But why the hell does Andrea Mitchell have a job?

I’m not picking on Andrea Mitchell at random. It’s just that she keep forcing the question each time she appears in MSNBC or NBC News. This week, when Donald Trump and his surrogates began floating the desperate and thoroughly evidence-free suggestion that Hillary Clinton’s health might somehow be a problem, even the most controversy-loving cable news pundits all shot it down. Except for Mitchell, who decided to go ahead and speculate that Hillary might indeed have some unspecified health issue, while not bothering to back it up with anything. And this is pretty much all she ever does.

Back in middle school we all knew the unpopular kid who was so desperate to be seen as the cool one that he or she would indulge in nonstop gossip. Andrea Mitchell is that kid. She gossips gleefully and randomly about Hillary Clinton, seemingly just making up whatever pops into her head, as if that’s what cable news pundits are supposed to do.

It would be different if Mitchell had any real info to provide. Plenty of television pundits do their job in an obnoxious way, but at least they deliver information. They’re skilled at developing inside sources or making friends within campaigns, so they end up being the first phone call when someone in politics wants someone in the news business to know something that they can’t announce themselves.

But Andrea Mitchell’s gossip is so useless, so routinely based in nothing, that it appears she has no sources or political relationships. Worse than being the kid who gossips about those who aren’t in the room in order to impress those who are in the room, she’s the kid who can’t get hands on any real gossip so she makes up gossip. Even by the increasingly tabloid standards of cable news, her reporting is a cringe-worthy embarrassment.

There are those who have suggested that she only still has her job because she’s married to Alan Greenspan, the former powerful Chairman of the Federal Reserve. I’ve never seen any evidence to connect those dots. Nor am I willing to accept the premise, without evidence, that a woman only has her job because of her husband. The reality is that NBC must have some reason for keeping Andrea Mitchell on the air. The network must be under the impression that someone somewhere enjoys watching her reporting. But when I talk to people all across the political spectrum, I can’t find anyone of the sort. I’m not trying to be mean. I just don’t get it.